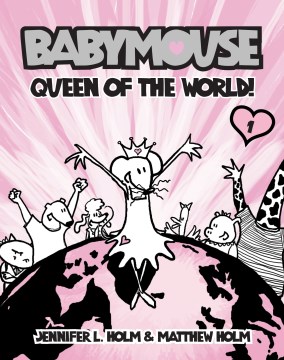 Queen of the World!

its an awesome graphic novel for kids from 6-9 (but even adults can and will like it) and it has won many awards, which it really deserves. my sister is also reading one of the books in this series.

it is a very amazing book for kids under the age of 8, but the overall book is amazing

For ages 6-8. This award winning book is both fun and funny! Babymouse is bored with her everyday life until she hears about Felicia Furrypaws’s exclusive slumber party, and then everything changes!

this book is awesome

this book is a gret book for kids ages 5-9. his book tells the story of Babymouse, an out cast who wants to be made queen of the world. she will settle for an invite to the most popular cat in school. This book will give joy to kids. i would give it 4 out of 5 stars

Babymouse is drawn in black and white, but has a heavy dose of pink which is utilized in several ways, sometimes as shaders, lighting, or to colour small objects. This one colour adds a great amount of depth to what are otherwise very simple drawings, and it fits well with the personality of Babymouse who looks at the world through the eyes of her imagination. She is young, and so is finding her way in the world (in this instance figuring out who her true friend is), therefore she is someone girls can easily relate to and learn from.

i really want to read the book!

This is the first book in a series.

This book is hilarious. Babymouse is a comic that I really enjoyed. You can't really predict the rest of the book. It kept me laughing every time I turned the page.
-Devon Jade-

fun and very enjoyable for the whole readers!

Babymouse is so cool! Probably best for 3rd graders, but I've seen both younger and older kids with this, including middle-schoolers.

Got for my grandkids but not at their level

I’ll admit, comics about little girl mice who wear dresses decorated with hearts and worry about being invited to the popular girl’s slumber party aren’t my usual cup of tea. But Babymouse: Queen of the World! is too good to dislike.

Babymouse: Queen of the World! is about an elementary school student named Babymouse who doesn’t quite fit in. She wants to be friends with the most popular girl in school (a cat), but her only friend is a boy weasel who, like her, is something of a geek and an outcast. Babymouse is an avid reader and dreamer. Her fantasies, which often get her in trouble with her teachers and fellow students, include being a fairy tale princess, a superhero, a Wild West gunslinger and more.

When I was in elementary school, I also read a lot of adventure stories, fantasized a lot and felt like I didn’t fit in with the popular kids, so I could really identify with Babymouse. Beyond that, the simple artwork is utterly charming, the story zips along and the iconic characters make the graphic novel appealing to children, teens and adults alike.

I didn’t think I’d like Babymouse: Queen of the World! as much as I did. Now I want to read the other Babymouse graphic novels. I recommend giving Babymouse a try, even if you think it’s not the type of thing you usually like. Share it with your children, too.