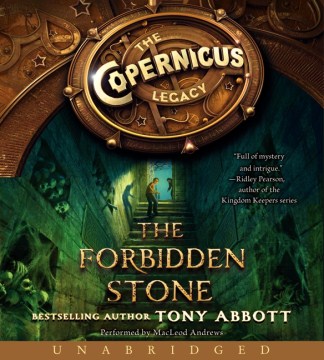 Baker & Taylor
Wade, Lily, Darrell, and Becca fly from Texas to Germany for the funeral of an old family friend, and wind up on a dangerous quest to unlock an ancient, guarded secret that could destroy the world.

A secret past can destroy the future

It all begins when Wade Kaplan receives a strange, coded email from his uncle Henry, shortly before the old man's sudden and suspicious death. He sets off for Germany to attend the funeral with his father, Roald, and his three friends Darrell, Lily, and Becca, only to discover that Uncle Henry left them yet another baffling message that they suspect is the key to figuring out how and why he died.

The message leads to a clue, which sends them to a dark and creepy family tomb. The more clues they discover, the farther they travel down a treacherous path toward an ancient, guarded secret. Soon, they are in a breathless race across the globe, running for their lives as a ruthless shadow organization chases them around every corner. Their only hope of saving themselves&;and the world that they know&;is to find twelve magical relics from a hidden past that will unlock the Copernicus Legacy.

The Forbidden Stone is the beginning of Tony Abbott's epic new series, a thrilling adventure packed with puzzles, intrigue, and action.

Baker
& Taylor
A debut installment in a planned six-part series by the best-selling author of the Secrets of Droon novels imparts the story of four friends who receive a coded email about a dangerous secret at the heart of family member's death. Simultaneous.

Loading...
No similar edition of this title was found at IPL.

Try searching for Forbidden Stone to see if IPL owns related versions of the work.