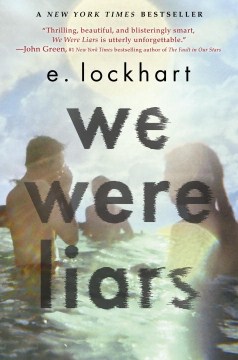 Spending the summers on her family's private island off the coast of Massachusetts with her cousins and a special boy named Gat, teenaged Cadence struggles to remember what happened during her fifteenth summer.
Publisher: New York : Delacorte Press, c2013
Edition: 1st ed. --
ISBN: 9780385741262
038574126X

This novel follows a young girl Cadence Sinclair and her family on their summer island. The Sinclairs keep many secrets and hidden dramas that Cadence slowly unravels as the summer progresses. Through many surprises and an epic plot twist, you learn the true story of the Sinclair family. This book handles the sensitive topics of trauma and loss beautifully, and will leave you thinking about it long after you finish.

This book is a beautiful master piece. You feel every kind of emotion through out the story.Every character has a unique personality and you just fell in love with all of them.This is a kind of story that will leave a really deep impact on you ,it will give you hope,make you happy and break your heart .I will recommend this not only to teens but also to adults. A book similar to this one is Genuine Fraud.

This book was recommended to me by a young bookseller, and although it is a ya book, it was a good read for the more mature reader as well. It has interesting characters, colorful prose, and a suspenseful twist at the end.

I enjoyed this book so much I read it all in one sitting. I didn't see the ending coming. I think the story went at a good pace. It took a while to get used to the writing at first, as I wasn't sure what was reality and what was hyperbole in some instances.

This book was pretty interesting... Each summer Cadence and her cousins spend the summers on her family's private island...I know PRIVATE ISLAND! One summer Cadence suffered an accident that left her with debilitating migraines and a bad case of amnesia. As the story goes on she discovers something rather sinister has happened to her, but she can't remember what! I'm giving this book a thumbs up for keeping me guessing. Whatever you think happened to Cadence is NOT what actually happened and you will NEVER be able to guess what actually happened. All the clues are there pay attention and read this book to find out what happened that summer with the liars.

E. Lockhart pens the incredible young adult novel, We Were Liars. The novel follows a young girl on a private island with her wealthy family. The novel was confusing at first, but clarification and a twist is presented at the very end. It made me want to go back and reread the novel, a second read that gave me incredible insight now that I had discovered the twist. I thought it was well written and had an interesting premise that is familiar in novels and films, but done in an original and intriguing fashion. I thought that the romance elements were entertaining, but I appreciated that the entire story did not revolved solely around the romantic relationship between the main character and her significant other. I highly suggest this novel to other readers. Emily, grade 12, of the Yorba Linda Teen Book Bloggers

One of the best YA novels I have read in a long time. It's been a few months since I've read it and I'm still thinking about it. One that you will want to go back and read again to catch things that you missed the first time around.

The end is so sad! But super good. Don't read if you don't mind sad endings.

“Be a little kinder than you have to.”

We are liars. We are beautiful and privileged. We are cracked and broken."

So many stars, it seemed like a celebration, a grand, illicit party the galaxy was holding after the humans were put to bed"

We believe that time heals."

We were warm and shivering, and young and ancient, and alive. I was thinking it's true we already love each other. already do."

Nothing, I lie there and wait, and remind myself over and over that it doesn't last forever. That there will be another day and after that, yet another day

What we'd had, how beautiful we were."

Things are messed up in the world. That's all."

kaallori thinks this title is suitable for 13 years and over

pinkbumblebee thinks this title is suitable for 13 years and over

ellizzabbetthhh01 thinks this title is suitable for 14 years and over

kairoberts thinks this title is suitable for 13 years and over

claralex800 thinks this title is suitable for 11 years and over

roropan thinks this title is suitable for 13 years and over

Orange_Elephant_51 thinks this title is suitable for 11 years and over

Laura_Jenkins thinks this title is suitable for 14 years and over

The Sinclairs spend every summer on their private island, Beechwood. Born within a few short months of each other, 3 of the Sinclair grandchildren and one friend of the family spend the summers thick as thieves, calling themselves The Liars. Cadence, Johnny, Mirren and Gat are inseparable every year, but the summer of their fifteenth year, things start to change. Cadence begins to fall in love with Gat (a friend of the family who is invited to Beechwood every summer) while the Sinclair family falls apart around them.
The summer ends in a tragic accident when Cadence is found in the shallow water of the beach, unconscious and on the verge of hypothermia. Unable to remember what brought her to the beach Cadence spends most of the school year recovering from her injuries and suffering severe migraines brought on by head trauma (the doctors tell her she must have hit her head on the shallow rocks along the beach).
Cadence’s sixteenth summer she does not join the liars at Beechwood but is instead sent on a European tour with her father, spending much of the time bedridden from migraines. It isn’t until two years after the accident that Cadence returns to Beechwood and The Liars. Meanwhile her grandfather has built a new house, and family relations seem at an all-time high, Cadence’s accident ending her families constant bickering.
But things have changed between Cadence and The Liars since the fifteenth summer. Gat is despondent, Johnny is hiding something and Mirren fights bouts of nausea. Something isn’t right, and it has to do with her accident. Cadence is determined to find out the truth about The Liars, Beechwood and their fifteenth summer.

THERE ARE SPOILERS! Cadence (Cady) is the heir to the very rich Sinclair family fortune. Her grandfather has a island where they spend every single summer at. When Cady is eight years old her anut Carrie meets a new guy (whom she is in love with) and he brings his nephew Gat to the island as company for Carrie's son Johnny. Johnny, Cady, Gat, and Mirren (whom is another cousin) create this group called The Liars (that only ever gets together at the island). When Cady is 15 something happens to the liars that causes her to almost kill herself. She then spends the next 2 years in Vermont or in Europe. When Cady is 17 years old she finally convinces her Mother to let her go back to the island so she can discover what happened 2 years ago. Also during those 2 years the other liars NEVER ONCE contacted her while she tried to contact them. So when Cady returns they are there acting like its normal and they haven't been seperated for 2 years without any contact what so ever. Basically after a lot of talking and some love. Cady discovers that Johnny, Gat, and Mirren died in a house fire.