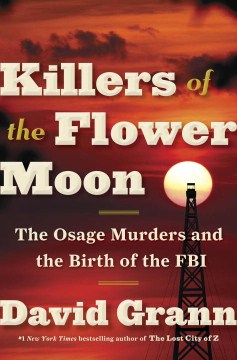 Killers of the Flower Moon

The Osage Murders and the Birth of the FBI

From New Yorker staff writer David Grann, #1 New York Times best-selling author of The Lost City of Z, a twisting, haunting true-life murder mystery about one of the most monstrous crimes in American history
&#160;&#160;&#160;&#160;&#160;&#160;&#160;
In the 1920s, the richest people per capita in the world were members of the Osage Indian nation in Oklahoma. After oil was discovered beneath their land, they rode in chauffeured automobiles, built mansions, and sent their children to study in Europe.
&#160; &#160; &#160;&#160;Then, one by one, the Osage began to be killed off. The family of an Osage woman, Mollie Burkhart, became a prime target. Her relatives were shot and poisoned. And it was just the beginning, as more and more members of the tribe began to die under mysterious circumstances.
&#160; &#160; &#160;&#160;In this last remnant of the Wild West&;where oilmen like J. P. Getty made their fortunes and where desperadoes like Al Spencer, the &;Phantom Terror,&; roamed&;many of those who dared to investigate the killings were themselves murdered. As the death toll climbed to more than twenty-four, the FBI took up the case. It was one of the organization&;s first major homicide investigations and the bureau badly bungled the case. In desperation, the young director, J. Edgar Hoover, turned to a former Texas Ranger named Tom White to unravel the mystery. White put together an undercover team, including one of the only American Indian agents in the bureau. The agents infiltrated the region, struggling to adopt the latest techniques of detection.&#160; Together with the Osage they began to expose one of the most chilling conspiracies in American history.&#160;
&#160; &#160; &#160;&#160;In Killers of the Flower Moon, David Grann revisits a shocking series of crimes in which dozens of people were murdered in cold blood. Based on years of research and startling new evidence, the book is a masterpiece of narrative nonfiction, as each step in the investigation reveals a series of sinister secrets and reversals. But more than that, it is a searing indictment of the callousness and prejudice toward American Indians that allowed the murderers to operate with impunity for so long. Killers of the Flower Moon is utterly compelling, but also emotionally devastating.

Baker & Taylor
The best-selling author of The Lost City of Z presents a true account of the early 20th-century murders of dozens of wealthy Osage and law-enforcement officials, citing the contributions and missteps of a fledgling FBI that eventually uncovered one of the most chilling conspiracies in American history.

Baker
& Taylor
Presents a true account of the early twentieth-century murders of dozens of wealthy Osage and law-enforcement officials, citing the contributions and missteps of a fledgling FBI that eventually uncovered one of the most chilling conspiracies in American history.

So Cool! This book is SO great actors Leonardo DiCaprio. Robert DeNiro “Bobby D” and director Martin Scorsese are making a movie out of it right now in 2020 & now 2021, pandemic. JFaulk

This book os an incredibly hauting, well-researched look at the Osage tribe mass murders in the 1920s and 1930s. I learned so much about reservations and the cruelty thag Native Americans has to endure for so long, and that the community still endures today. A must read.

Read it and remember, lest we all forget.
Excellent account and re-visitation of an important time in American history.

There have been plenty of rave reviews about this book but I found it a bit slow and sometimes had trouble keeping track of characters. It is meticulously researched and plenty of what happened with the Osage will leave you amazed and furious. Worth a read but to me a little dry.

Killers of the Flower Moon exposes a history of systematic murder of native Americans by white Oklahomans who coveted the wealth of Osage Indian families, whose fortunes came from those hereditary rights to oil revenues from their reservation lands. The murderous campaign was born of prejudice. To be sure, greed was involved, but underlying all is the belief that the Osage were inferior and undeserving. Newspapers ran stories about profligate spending, but “rarely, if ever, mentioned that numerous Osage had skillfully invested their money or that some of the spending…reflected ancestral customs that linked grand displays of generosity with tribal stature.” Through the Department of the Interior, the federal government declared many Osage “incompetent” based on whether they were full-blooded or mixed. Government-assigned financial guardians oversaw the expenditures by adult Osage, as if they were children. Invoking fire-and-brimstone, biblical condemnation, Congressmen gave these guardians full control over how tribe members could spend their oil revenues. David Grann attributes many of the Osage murders to these guardians.

Read February 2020; Scorsese next film based on this book; recommended by Marc

Such an interesting story about the very beginnings of the FBI and the story of the Osage Murders in Oklahoma that I'd never known about!

Everyone should read this book. Can’t say enough about it.

Like most have said, great book and very shameful event in our history as a nation. The book does read like a novel despite the historical content, a testament to the writer's ability to bring characters to life. Warning though: the descriptions of murders don't hide the awful hideous evil in some men's hearts.

“The U.S. government, contending that many Osage were unable to handle their money, had required the Office of Indian Affairs to determine which members of the tribe it considered capable of managing their trust funds. Over the tribe’s vehement objections, many Osage, including Lizzie and Anna, were deemed ‘incompetent,’ and were forced to have a local white guardian overseeing and authorizing all of their spending, down to the toothpaste they purchased at the corner store.” - p. 58

“Yet an ugliness often lurked beneath the reformist zeal of Progressivism. Many Progressives—who tended to be middle-class white Protestants—held deep prejudices against immigrants and blacks and were so convinced of their own virtuous authority that they disdained democratic procedures. This part of Progressivism mirrored Hoover’s darkest impulses.” - p. 178

MelissaBee thinks this title is suitable for 16 years and over