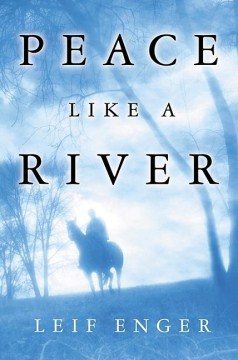 Baker & Taylor
Eleven-year-old Reuben shares the story of how his father, trying to raise his sons alone in 1960s Minnesota, takes their family on a quest to find Reuben's older brother, who has been charged with murder.

Perseus Publishing
Leif Enger's rhapsodic novel about a father raising his three children in 1960s Minnesota is a breathtaking celebration of family, faith, and America's pioneering spirit. Through the voice of eleven-year-old Reuben, an asthmatic boy obsessed with cowboy stories, Peace Like a River tells of the Land family's cross-country search for Reuben's outlaw older brother, who has been controversially charged with murder. Sprinkled with playful and warmhearted nods to biblical tales, classic American novels such as Huckleberry Finn, the adventure stories of Robert Louis Stevenson, and the Westerns of Zane Grey, Peace Like a River brilliantly incorporates the best elements of all these genres and ultimately earns its own prominent and enduring place on the shelf among them. Reuben Land was born with no air in his lungs, and it was only when his father, Jeremiah, picked him up and commanded him to breathe that his lungs filled. Reuben struggles with debilitating asthma thenceforth, but he is a boy who knows firsthand that life is a gift, and also one who suspects that his father can overturn the laws of nature. When Reuben's older brother, Davy, kills two marauders who have come to harm the family, the town is divided between those who see him as a hero and those who see him as a cold-blooded murderer. On the morning of the trial, Davy escapes from his cell, and when his family finds out they decide to go forth into the unknown in search of him. With Jeremiah -- whose faith is the stuff of legend -- at the helm, the family covers territory far more glorious than even the Badlands, where they search for Davy from their Airstream trailer. By the time the journey is over, they will have traversed boundaries of a different nature entirely. Marked by a soul-expanding sense of place and a love of storytelling, Peace Like a River is at once a heroic quest, a tragedy, a romance, and a heartfelt meditation on the possibility of magic in the everyday world.

Blackwell North Amer
Raised on tales of cowboys and pirates, eleven-year-old Reuben Land has little doubt that miracles happen all around us, and that it's up to us to "make of it what we will." Reuben was born with no air in his lungs, and it was only when his father, Jeremiah, picked him up and commanded him to breathe that his lungs filled. Reuben struggles with debilitating asthma from then on, making him a boy who knows firsthand that life is a gift, and also one who suspects that his father is touched by God and can overturn the laws of nature.
The quiet midwestern life of the Lands is upended when Davy, the oldest son, kills two marauders who have come to harm the family; unlike his father, he is not content to leave all matters of justice in God's hands. The morning of his sentencing, Davy - a hero to some, a cold-blooded murderer to others - escapes from his cell, and the Lands set out in search of him. Their journey is touched by serendipity and the kindness of strangers - among them a free spirit named Roxanna, who offers them a place to stay during a blizzard and winds up providing them with something far more permanent. Meanwhile, a federal agent is trailing the Lands, convinced they know of Davy's whereabouts.

Baker
& Taylor
Eleven-year-old asthmatic Reuben Land chronicles the Land family's odyssey in search of Reuben's older brother, Davy, who has escaped from jail before he can stand trial for the killing of two marauders who came to their Minnesota farm to harm the family. A first novel. 100,000 first printing. $150,000 ad/promo. Reader's Digest Select. BOMC Main.

One of my favorite novels of all time—I read it many years ago...reminder to myself to reread!

This haunting novel examines complex themes (family, loyalty, consequences, good vs evil, sacrifice, love) while exploring spirituality (in this case Christian) and magic operating in the everyday world. Especially evocative was the exploration of 'father'; from a mysterious/benevolent heavenly Father to a loving/faithful/sacrificing father in Jeremiah to a malevolent/corrupt/punishing father-figure in Jape. This all plays out in the stark and harsh setting of the upper Midwest while the ideals and lure of the Old West give substance and meaning to the narrator and his sister. The characters are fresh, funny, poignant and the writing is poetic and dynamic; the use of a young narrator is especially affective. A new favorite novel along the lines of True Grit, To Kill A Mockingbird, and Cold Mountain.

Uplifting, moving, deep, unforgettable, exquisite. None of these words do real justice to "Peace like a river". This is one of the best books I have ever read. It is so beautifully written, every word chosen with such delicacy and care by the author. Before you realise its characters will earn a place in your heart and you'll find yourself thinking about them when being away from the book -so alive they become. The novel will draw you into a world of integrity, faith and family love which will stay with you long after you finish reading it. I love how the book lacks all the annoying saccharinity but it is so beautifully written that even while exposing the crude reality it seems to rock you in a sea of beauty and peace. I found myself reading time and again entire passages, just admiring how Leif Enger had managed to evoque so much emotion in such an elegant way. I will be giving this book as a present many times. It is a true gift.

This one's a charmer! The characters are lovely and the setting (Minnesota and North Dakota) is memorable. I started reading it on Friday and finished on Sunday, with a smile.

This is such a beautiful book, brought delightfully to life by Leif Enger through his adept descriptive writing style. While some of the miracles featured early on in the book may seem over-the-top, these miracles no longer seem out of place as the book develops and may perhaps instead leave you yearning for a miracle in your own life.

It is mesmerizing how such depth can be conveyed through the "innocent-eye" perspective of Reuben Land. He is merely a witness, leaving us to interpret what he presents.

Jeremiah Land tells his family "We and the world, my children, will always be at war. Retreat is impossible. Arm yourselves" (Enger 4). Indeed, his family faces tragedy, evil, and hardship but must overcome these forces. Jeremiah Land is faithful to God, and God to him. Though his family seems to be further broken as the novel progresses, there is still much hope, peace, providence, and healing for this family.

This is a stunning book. I don't think I have ever read a book this captivating and so well-written.
Beautiful prose, memorable quotes and very interesting plot. It is a brilliant book and it reads as if it was written outside the writer. I highly recommend this book. I will buy it for my personal library. Love it!

I liked this book, but dreaded finishing because I thought something bad and sad was going to happen. I was partly right. The story is narrated by 11-year-old Reuben who suffers from asthma. His widower father cares for him, his 16-year-old brother Davy and 9-year-old sister Swede. This is not an ordinary family. Reuben has secretly observed his dad performing miracles while talking to God, and his sister is obsessed with the wild west hero gangsters like Butch Cassidy, Jesse James and the Younger boys. She is an excellent verse writer and has embarked on a long epic about hero Sundown and his nemesis Vargas, portions of which Reuben shares with us readers. The beautiful writing carried me along through chapter after chapter following the family's journey west trying to guess Davy's track after he killed two men and fled. Seeing all the action through Reuben's young understanding was refreshing and reminiscent for me of 'True Grit'. This whole tale brings up questions about right and wrong, the power of faith, the value of self-reliance, the strength of family, love,and loyalty - I guess all the good stuff. The story is set in the dead of winter in the Dakotas and the word pictures of the cold, the snow, the freezing temperatures made me put on a sweater.

A beautifully written first novel. Story of a motherless family told by one of the three children. Set in Minnesota in the sixties, there are elements of the spiritual and the mystic, a poetry writing younger sister, an outlaw brother. A great read.

This is the most mesmerizing book I've read in years. The characters live with you between readings. Enger's style is so vivid that he captures all five senses in your imagination. The action seems so real and engaging you feel like you are living two lives, your own and the characters'.
Beg, borrow or steal this book.