Saved Searches Advanced Search
Due to the stay at home order, the Cookstown, Lakeshore, and Stroud branches are closed to the public. Curbside pick-up is available to our Library customers and patio computer service is available at Cookstown and Lakeshore branches during opening hours by booking an appointment.
Print 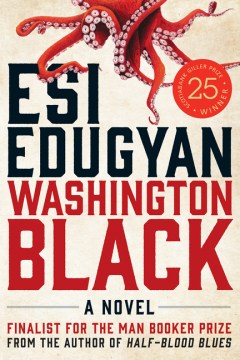 Winner of the 2018 Scotiabank Giller Prize

A dazzling, original novel of slavery and freedom, from the author of the international bestseller Half-Blood Blues

When two English brothers arrive at a Barbados sugar plantation, they bring with them a darkness beyond what the slaves have already known. Washington Black &; an eleven year-old field slave &; is horrified to find himself chosen to live in the quarters of one of these men. But the man is not as Washington expects him to be. His new master is the eccentric Christopher Wilde &; naturalist, explorer, inventor and abolitionist &; whose obsession to perfect a winged flying machine disturbs all who know him. Washington is initiated into a world of wonder: a world where the night sea is set alight with fields of jellyfish, where a simple cloth canopy can propel a man across the sky, where even a boy born in chains may embrace a life of dignity and meaning &; and where two people, separated by an impossible divide, can begin to see each other as human.

But when a man is killed one fateful night, Washington is left to the mercy of his new masters. Christopher Wilde must choose between family ties and young Washington's life. What follows is a flight along the eastern coast of America, as the men attempt to elude the bounty that has been placed on Washington's head. Their journey opens&#160;them up to the extraordinary: to a dark encounter with a necropsicist, a scholar of the flesh; to&#160;a voyage aboard a vessel captained by a hunter of a different kind; to a glimpse through an unexpected portal into the Underground Railroad. This is a novel of fraught bonds and betrayal. What brings Wilde and Washington together ultimately tears them apart, leaving Washington to seek his true self in a world that denies his very existence.

From the blistering cane fields of Barbados to the icy plains of the Canadian Arctic, from the mud-drowned streets of London to the eerie deserts of Morocco, Washington Black teems with all the strangeness of life. This inventive, electrifying novel asks, What is Freedom? And can a life salvaged from the ashes ever be made whole?

Washington Black by Esi Edugyan is a story of a slave named George Washington “Wash” Black on a Caribbean plantation in the early 1800’s, a period of increasing enlightenment among individuals and the great inventions of the Industrial Revolution. The plantation is transferred to a despicable, white man named Arasmus Wilde, along with his eccentric, curious brother, Christopher “Titch” Wilde. Titch is accompanying his brother for the opportunity to test his invention, the ‘Cloud-Cutter’, an improved hot-air balloon, and he requires someone to help him finalize the plans of his machine, so he asks Wash to help him finish. As they finish building the machine, Wash is placed into a situation where he is blamed for the suicide of a close relative to the Wilde brothers, Phillip Wilde, so Wash, and Titch must escape with the newly built Cloud-Cutter to save Wash from a certain death. Wash travels across the world including the Canadian Arctic, Nova Scotia, and England to escape the bounty that is placed on his head. Throughout the book, Wash finds love with a woman named Tanna who is the first to truly accept Wash as a person and respects him as one and learns about the deeply distressing things that Titch has done, despite appearing like an enlightened, altruistic person.

What I found interesting about Washington Black is that it is a story about compassion and companionship as Titch learns to appreciate Wash as less of a slave and more as a human being as they get to know each other throughout their journey. It is also a story of betrayal as Titch leaves Wash when in the Arctic following an event with Titch’s father that left Titch frustrated with Wash for destroying his relationship with his family. Wash must learn how to deal with these mixed messages of acceptance as well as the lies and deceit he was told to be so he can finally be at peace as to why Titch left him. You grow to adore and respect certain characters while despising others because the character development in this book is excellent and those opinions of the characters can change throughout the story, which is what makes this book great. Essentially, Washington Black is a coming of age story of a former slave who must now learn how to learn how to live by himself in a society that do not look to keenly towards his race of people. I loved how the book was beautifully written with many paragraphs of descriptive imagery of the environment, like marine life such as the octopus with their vibrant colours and the way they interact with the world around them, and the various paintings of the environment that Wash paints that are covered in great detail.

If you are interested in the time period of great innovation and social changes of the Industrial Revolution, as well if you are interested how minorities were treated by society during this time period, then this is a must-read that will not disappoint. It is very easy to read and understand the messages found within the book, making it a better book for anyone who does not read as much or takes longer to read. I believed this is a very good book for young adults and older who are interested in the history of slavery.

Great book, much better than his other one The Second life of..."

Even though this was a page turner there was something not quite right about it. Washington finds a troubling freedom, has unbelievable adventures, is haunted by abandonment, falls in love, enjoys painting and sketching, is fascinated with the sea, is involved in creative invention; but there's a bit too much description both of the environment and of feelings/perception. Just kind of a sad feel to the story. The actual hard cover book is easy to hold and the large print nice. Decide for yourself, you may not be able to put it down once you begin.

One of my favorites I've read this year. Edugyan used a lot of 19th C vernacular - some readers may find difficult yet I appreciated the effort and style; helped maintain setting and tone of the story. Loved her descriptions of characters' personalities, physical attributes, and dialogue.

One can read this as a simple historic novel, but it's more than that. Beginning on a Barbados' plantation, Washington's story is a story of race. So if you cannot handle that, this is not for you. The discussions of science and fanciful instruments blend the genre just a bit and left me wondering where the story was headed.

So in parts III and IV Wash catches and observes an octopus. Did anyone else read that as a metaphor for Wash? Intelligent creature which can camouflage itself for protection, defense, attractiveness, etc. I felt this symbolized his youth once Titch nurtured his artistic talent. Wash used his talents to gain education and escape from Titch. But as he matures and meets Tana the question is posed that maybe Titch had exploited Wash. Either way, Wash 'adapts' to his environment and those around him in his art, his labors, his scientific observations in order to allow people to see value in him. As a black man, former slave, with facial scars, Wash is constantly guarded and feels he must prove his worth to others.

I will keep an eye out for what Esi Edugyan writes in the future - lovely writing style and very creative.

A wonderful book, very well written. I loved it from cover to cover.

I liked this book. The author writes well. The story could've been a bit more exciting as you were lead to believe that the boy would be taken on many more adventures in the balloon. But I liked it.

There are brutal details of life on the slave plantation at the beginning of the book. Wash's life does get better, but be warned that the start of it makes for tough reading.

A great story of an eight year old slave boy from Barbados growing into manhood. He encounters prejudice, fear, betrayal, scorn, tragedies and rejection, along with a God given talent, direction by welling meaning people, a scientific mind, travel and excitement. The author does an excellent job of describing G.W. ( Wash) Black's feeling and emotions throughout his life's adventures. Easy read and hard to put down. Reason for not a 5 star rating was the abrupt ending.

I had been warned by Mister Ibel that snow was white, and cold. But it was not white: it held all the colours of the spectrum. It was blue and green and yellow and teal; there were delicate pink tintings in some of the cliffs as we passed. As the light shifted in the sky, so too did the snow around us deepen, find new hues, the way an ocean is never blue but some constantly changing colour.

Though a child, I did not picture a monster – he was no creature all teeth, all vicious blue eyes behind mangled wire spectacles; his voice was not slow and reptilian, his hands not huge black claws. I knew the nature of evil; I knew its benign, easy face. He would be a man, simply.

It was a wonder to me that a world of cruelty and hardship existed, even now, only some miles away. How was it possible, thought I, that we lived in such nightmare and all the while a world of men continued just over the horizon . . .

She seemed neither preoccupied nor uneasy; her silence was marked by a held-in rage that I have only now, several years later, come to understand as the suppression of will. For she was a ferociously intelligent woman, and it strained her to have to conceal it. She sometimes spoke as no slave should speak; the scar on her face was some testament to this.

Too brutal, too disturbing - not bedtime reading.

Born into slavery on Faith Plantation in Bardbados, George Washington Black has never known any other life. When his master dies, the slaves expect the estate to be broken up and sold off, but instead two brother arrive, nephews of the old owner. Erasmus Wilde proves to be a cruel man who drives his slaves harder than the old owner ever did. But his brother, Christopher “Titch” Wilde, is a man of science, and while the other slaves on Faith are doomed to a harder lot, Wash is selected to help Titch with his experiments, and his seemingly impossible dream to launch an airship called the Cloud Cutter. However, being selected as Titch’s assistant will come at a price Wash could never have expected, and their strange, uneven relationship will change the course of Wash’s life forever, for better and for worse.