Saved Searches Advanced Search
Due to the Provincewide Shutdown, all branches will be closed after 1 p.m. on Dec. 24. Curbside pick-up, online programming, and digital are services available. For more information visit innisfilidealab.ca/covid-19-update
Print 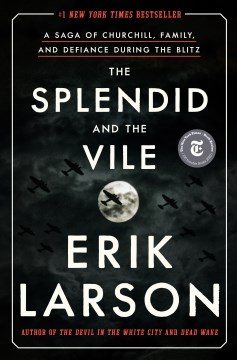 The Splendid and the Vile

A Saga of Churchill, Family, and Defiance During the Blitz

"The #1 New York Times bestselling author of The Devil in the White City and Dead Wake delivers a fresh and compelling portrait of Winston Churchill and London during the Blitz On Winston Churchill's first day as prime minister, Hitler invaded Holland and Belgium. Poland and Czechoslovakia had already fallen, and the Dunkirk evacuation was just two weeks away. For the next twelve months, Hitler would wage a relentless bombing campaign, killing 45,000 Britons. It was up to Churchill to hold the country together and persuade President Franklin Roosevelt that Britain was a worthy ally-and willing to fight to the end. In The Splendid and the Vile, Erik Larson shows, in cinematic detail, how Churchill taught the British people "the art of being fearless." It is a story of political brinkmanship, but it's also an intimate domestic drama set against the backdrop of Churchill's prime-ministerial country home, Chequers; his wartime retreat, Ditchley, where he and his entourage go when the moon is brightest and the bombing threat is highest; and of course 10 Downing Street in London. Drawing on diaries, original archival documents, and once-secret intelligence reports-some released only recently-Larson provides a new lens on London's darkest year through the day-to-day experience of Churchill and his family: his wife, Clementine; their youngest daughter, Mary, who chafes against her parents' wartime protectiveness; their son, Randolph, and his beautiful, unhappy wife, Pamela; Pamela's illicit lover, a dashing American emissary; and the cadre of close advisers who comprised Churchill's "Secret Circle," including his lovestruck private secretary, John Colville; newspaper baron Lord Beaverbrook; and the Rasputin-like Frederick Lindemann. The Splendid and the Vile takes readers out of today's political dysfunction and back to a time of true leadership, when-in the face of unrelenting horror-Churchill's eloquence, courage, and perseverance bound a country, and a family, together."-- Provided by publisher.
Publisher: New York : Crown, [2020]
Edition: First edition
Copyright Date: ©2020
ISBN: 9780385348713
Branch Call Number: 940.542121 Lar
Characteristics: xii, 585 pages : map ; 25 cm

THE SPLENDID AND THE VILE’s title comes from a line (see Quotes) in the diary of John Colville, PM Winston Churchill’s secretary, describing his experience of watching bombs fall over London during WWII. Author Erik Larson’s descriptive writing vividly brings history to life and makes the reader feel like “you are there” in the middle of the Blitz and the Battle of Britain. The book focuses on the first year Churchill was Prime Minister, May 10, 1940 to May 10, 1941. Using historical documents like diaries, letters, and memoirs, Larson takes a fascinating and intimate look at the lives, thoughts, and feelings of Churchill and his inner circle, including staff, friends, and family. He also includes some sobering and humorous details of what life was like for British citizens during the War. As in his previous works, Erik Larson’s non-fiction storytelling style makes this book and its subject compelling. I can’t recommend it enough. Churchill was definitely the right leader for the time.

Globe 100 2020. Churchill's inspiration during the blitz.

Erik Larson's history of the first year of Churchill's role as Prime Minister is fascinating. He gives a day by day account of some of the key moments during that year, and shows just how devastating the London blitz was, and how Winston rose to the challenge. I especially enjoyed learning about the year through the diaries and observations of people who were closest to Winston during that time, including his daughter Mary and his secretary John Colville. Simple diary entries from several of the thousands of British Observers during that time are very enlightening about what life was like for regular Brits. I highly recommend this book to anyone interested in WWII, Churchill's first year as PM and anyone who would like to expand their knowledge in that sector. I'm not usually a reader of non-fiction, but this is thoroughly enjoyable and I learned a lot of interesting things!! I would read a "Volume 2" if it was available. Erik Larson's books are very entertaining!!

I don't read much nonfiction but Erik Larson can hold my attention tightly. I was surprised how much I like Dead Wake, and now I am so proud I read The Splendid and the Vile in just a few days. This is the saga of the Churchill family in 1940; the first year of his office as British PM and the first year of WWII. Through diaries and proven papers, Larson specializes in bringing these historical characters to life, featuring their personalities, and enabling me to absorb the historical facts. I cannot do nonfiction without characters.

Churchill's first year in power provides the narrative for this book by Larson as he explores the Blitz and the response of the British people to the Nazi threat. Powerfully written, and the sort of book that compels you to keep reading.

My dad was a radar technician who spent the war in Scotland at a Chain Low radar station after training in Clinton Ontario in radar, top secret at the time. When he left I was Two, staying with mom in grandpa’s mansion at 32 Teddington Park in North Toronto. Grandpa had a mom and her two children staying as his guests from England to escape the bombing and more probably, invasion. Needless to say, from an early age the war was close to home. When the Japs torpedoed battleship row December 7, 1941, there was fear that they would land troops unopposed in British Columbia.

This book puts the first year of the war in stark relief, in particular what it was really like to be bombed not just in London, as there was no defense at that time against nightime bombing, with 500 or so German bombers overhead. The RAF fighter aircraft production was a target, and Churchill enlisted Beaverbrook to oversee production, which he did to the point that the RAF was able to actually increase production during the blitz while the Germans counted on winning the air war as a precondition for sea borne invasion. As a student of history I found his book full of critical information not previously available.

Amazing book; couldn't put in down!

Terrific history that reads like a page turner. Truly enjoyed this read and couldn't wait to get back to it each day.

Excellent read. Addictive. Too short. Would have liked to have it go on to the end of WWII and hear insights about Stalin, Mussolini, and more. One discordant note is Larson's eschewing of photos and maps. But overall, a fine read.

This is classic Erik Larson. What an interesting book. He has a knack for mixing official history as told by the figures that history books are made of and with accounts by the common individual who is experiencing the history that the figures in history books create. The reader learns about behind the scenes of world events and little things that never make history books. Churchill comes to office as the rest of Europe is falling to Germany. Churchill has to find the way to keep England from falling and get the help from the US that England needs to survive He does an excellent job letting the reader know about Churchill's big personality and how Churchill became the symbol of British resistance to the common man. You learn about Churchill's courting Roosevelt and learn how the British resilience effects the Nazi upper leaders. Hess makes a daring journey to Scotland to try to broker peace and sees the rest of the war from jail. Larson was fortunate to have dairies created by the "man in the street" for the Mass Observation Project. They tell of the roofs pierced with shrapnel, the windows broken and not repaired due to shortages of glass, the Londoners spend the night in subway shelter during the raids and how the exiled royalty from Norway spent their nights, individuals pinching themselves to see if they are still alive after a particularly devastating air raid. The reader gets a good picture of the British "stiff upper lip" and their determination to survive.

I gave the book 4 stars because it is 500 pages long. It is overly long even though it is good. It was too much information. I wish he had condensed the book to about 400 pages. It was repetitive at times. But I strongly recommend it. No one writes history the way Erik Larson does.

“On one of Churchill’s full-moon weekends at Ditchley, Diana Cooper, wife of Information Minister Duff Cooper, told Churchill that the best thing he had done was to give people courage.
He did not agree. ‘I never gave them courage,’ he said. ‘I was able to focus theirs.’’ - p. 483

“The night… was cloudless and starry, with the moon rising over Westminster. Nothing could have been more beautiful and the searchlights interlaced at certain points on the horizon, the star-like flashes in the sky where shells were bursting, the light of distant fires, all added to the scene. It was magnificent and terrible: the spasmodic drone of enemy aircraft overhead; the thunder of gunfire, sometimes close sometimes in the distance; the illumination, like that of electric trains in the firmament. Never was there such a contrast of natural splendor and human vileness.” - p. 238

“Tea anchored the day—though at teatime, Churchill himself did not actually drink it, despite reputedly having said that tea was more important than ammunition. He preferred whiskey and water. Tea was comfort and history; above all, it was English. As long as there was tea, there was England.” - p. 186