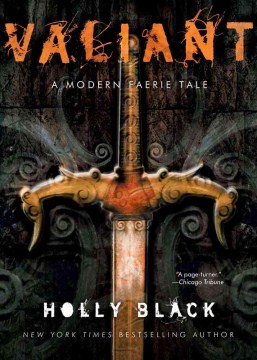 A Modern Tale of Faerie

I can absolutely see the growth in Holly Black's writing from Tithe to Valiant, and I enjoyed this one more than the first for sure.

Val has been betrayed by her mother and her boyfriend, and she needs to get away. She takes the train to New York City and makes friends with Lolli and Dave, two kids who live on the street. Val doesn't know what she's getting into, squatting with them, though; soon, she discovers that Dave and his brother Luis are entangled in a faerie web that started with Luis having the sight when he was a child. Eventually, Val meets Ravus, a troll who the boys run deliveries for. Val fights for what she believes in, and this fae troll actually be a person worthy of her ferocity, unlike everyone else in her old life.

This one reads a lot like those really ~*edgy*~ YA novels of the early 2000's. There are so many drugs and drug-related happenings, Val shaves her head at one point, she lives in the streets with other street kids who have nowhere else to go. All the boxes seem to be checked, but, if I didn't think too hard about the time period or how it fit into those conventions, I feel like this one is more timeless than the first novel in the series.

And maybe that's because I found it more believable overall. Val as a character is much more consistent than Kaye, though she can be just as extreme. She's a toughie, a jock, a sidekick rather than a hero. But she maintains that personality well throughout, and her actions make sense given the shit she goes through. I liked her more than I expected to. The rest of the cast of characters was rich and varied as well, though I struggled with Lolli and Dave. I think that was kind of the point of them, though. And Ravus. Oh, Ravus. I love a good, broody beast with a heart of gold.

Again, I can see the growth in writing here, and I'm excited to see how this series ends. I love that these are so obviously stepping stones to getting to the era of The Folk of the Air. I love the world Holly has created, and I love that she writes these stories that are whimsical and magical yet dark and brutal. Those contrasts between light and dark, and human and fae, and the way that she plays with them to create such interesting grey areas makes it all so effective and engaging.

I really enjoyed the tie-ins with the fairies, without them being everywhere and overwhelming. The characters and storyline were good and I look forward to reading the rest of the series.

The second installation of Black's Modern Faerie Tales takes a step back from the first. 17-year-old Valerie runs away from home and finds a group of misfit squatters in New York City who introduce her to the life of scavenging, magical drugs, and faeries. Loosely connected to the first novel, this is a romance unlike any you may have encountered.

I struggled till page 200 then was too bored to continue. This is a story about urban runaways and junkies. Nothing magical about it in more ways than one.

WAS SOOOOO GOOD!!!
OMG she fell in love with a troll, and I still thought it was cute!!!

Ms. Black’s take on faeries is as far from Disney adaptations as you can get. Her creatures are sly, demonic and occasionally vicious beings, as likely to kill human beings as couple with them. Reading about how a bunch of foolish adolescent mortal blunderers try to navigate their immortal world makes for a hair-raising and terrifying tale. Nothing is quite what you would expect in this tale, a story where a lover is a monster, a girl becomes a hero and a faery is made into a sacrifice. Faery dust may make you fly but it also brings you crashing back to the ground. Like faery dust, Valiant is a splendid, giddy, horrifying joyride.

So the first book has that, little bit weird, raunchy beginning, this on has the little bit screwed up, touch of raunchy everything-but-the-ending. I was far from prepared for the 3/4 the book where we're following drug addict street kids and the ending hardly made up for it. I get the whole modern fairy tale thing, but DAMN! Some of the things the author passes off as acceptable in the book (morally) are so awfully twisted they deserve rebuke, but I'll spare you.
Overall the book wasn't terrible, but I would have thought twice had I realized what I was getting into. The first book hardly hinted at the lows Black's characters might sink to.

I read this book about 4 years ago and I still remember what spurred Val into running away from home. What happens is just one of many heart breaking events that occur in the book. Black's characters are different from what you normally find in other teen fantasy novels (which is a relief given how many authors get away with writing Mary Sues). I also like that dark, creepy nature that you often find in this series. Somehow it's more sinister when it centers around the humans. I really loved the Val/Ravus pairing, mostly for the fact that she wasn't with him for superficial reasons (he's a troll after all). Too often I find in most teen fiction that the main romantic interest is gorgeous beyond all possible belief (Twilight anyone?). It's nice to have a break from that shallow mindset. Another thing I'd like to note is that there's a cameo appearance from the Mortal Instruments series (the dark carriage scene).

I was slightly disappointed in this novel, but my expectations for it were also ridiculously high after reading its predecessor Tithe. Like Kaye (the starring character in Tithe who makes a cameo appearance in Valiant, along with Roiben), Val is a very strong heroine who has her share of intelligence and guts. And I absolutely loooovvved Ravus! He's such a kind-hearted noble soul and the perfect match for our troubled teen Val. I only wish this book was longer and had delved more into the relationship between the two as they don't even meet until closer to halfway through the book! And while I liked Val, I grew tired of her shooting up the faerie drug Nevermore with her homeless friends and felt that aspect of the story went on for far too long (though that did just make me all the more proud of her when she finally quit the habit). So while I liked the Ravus-Val pairing better than the Roiben-Kaye one, Tithe was an overall better storyline, though Valiant had an exciting climax and sweet ending.

I love how Holly Black is so creative with her books, i love her style of writing, and i most definitely enjoyed Valiant, Tithe, and Ironside !

Coarse Language: use of swear words

Mitharu thinks this title is suitable for 16 years and over

LocketLibrarian thinks this title is suitable for 14 years and over

couges thinks this title is suitable for 18 years and over

Sakuramelody thinks this title is suitable for 18 years and over

“You carried my heart in your hands tonight," he said. "But I have felt as if you carried it long before that.”

“You carried my heart in your hands tonight," he said. "But I have felt as if you carried it long before that.”