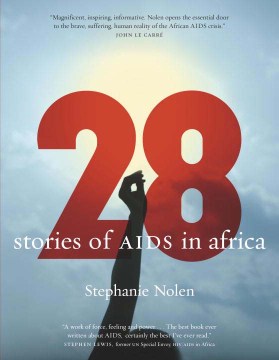 28 Stories of AIDS in Africa

Random House, Inc.
From one of our most widely read, award-winning journalists – comes the powerful, unputdownable story of the very human cost of a global pandemic of staggering scope and scale. It is essential reading for our times.

In 28, Stephanie Nolen, the Globe and Mail’s Africa Bureau Chief, puts a human face to the crisis created by HIV-AIDS in Africa. She has achieved, in this amazing book, something extraordinary: she writes with a power, understanding and simplicity that makes us listen, makes us understand and care. Through riveting anecdotal stories – one for each of the million people living with HIV-AIDS in Africa – Nolen explores the effects of an epidemic that well exceeds the Black Plague in magnitude. It is a calamity that is unfolding just a 747-flight away, and one that will take the lives of these 28 million without the help of massive, immediate intervention on an unprecedented scale. 28 is a timely, transformative, thoroughly accessible book that shows us definitively why we continue to ignore the growth of HIV-AIDS in Africa only at our peril and at an intolerable moral cost.

28’s stories are much more than a record of the suffering and loss in 28 emblematic lives. Here we meet women and men fighting vigorously on the frontlines of disease: Tigist Haile Michael, a smart, shy 14-year-old Ethiopian orphan fending for herself and her baby brother on the slum streets of Addis Ababa; Alice Kadzanja, an HIV-positive nurse in Malawi, where one in six adults has the virus, and where the average adult’s life expectancy is 36; and Zackie Achmat, the hero of South Africa’s politically fragmented battle against HIV-AIDS.

28 also tells us how the virus works, spreads and, ultimately, kills. It explains the connection of HIV-AIDS to conflict, famine and the collapse of states; shows us how easily treatment works for those lucky enough to get it and details the struggles of those who fight to stay alive with little support. It makes vivid the strong, desperate people doing all they can, and maintaining courage, dignity and hope against insurmountable odds. It is – in its humanity, beauty and sorrow – a call to action for all who read it.

Blackwell North Amer
For the past six years, Stephanie Nolen has traced AIDS across Africa, compiling an unprecedented, uniquely human portrait of the continent in crisis. Now, through twenty-eight vivid stories - one for every million Africans living with the disease today - she chronicles the lives of men, women, and children involved in every aspect of the AIDS crisis, making them familiar. And she explores the effects of an epidemic that well exceeds the Black Plague in scope, and the reasons why we must care about what happens.
"I looked at AIDS in Africa for a long time before I understood what I was seeing," writes Nolen. "AIDS is not an event, or a series of them; it's a mirror held up to the cultures and societies we build." In every instance, she has borne witness to the stories she relates, whether riding with truck driver Mohammed Ali on a journey across Kenya; following Tigist Haile Michael, a smart, shy fourteen-year-old Ethiopian orphan fending for herself and her little brother on the slum streets of Addis Ababa; depicting the heroic efforts of Christine Amisi, a doctor treating AIDS in the middle of Congo's brutal war; or talking to Nelson Mandela and his wife about coming to terms with his own son's death from AIDS. Nolen's stories reveal how the disease has managed to spread so inexorably, preying on the most intimate moments of a young, productive generation; how it is inextricably tied to poverty, conflict, and famine in the many cultures it ravages; how treatment works, and how people who can't get it fight to stay alive with courage and dignity against huge odds.
Imagine the entire population of New York, Chicago, and Los Angeles combined infected with HIV, and the magnitude of the catastrophe in Africa is clear.